I love watching movies, traveling and conversations over coffee or wine, but what I love most is telling stories through photography, writing, and film. Here's to capturing stories that inform, spark change and connect us further to the human experience.
FOLLOW ME

The Loss of Touch Amid the COVID-19 Pandemic 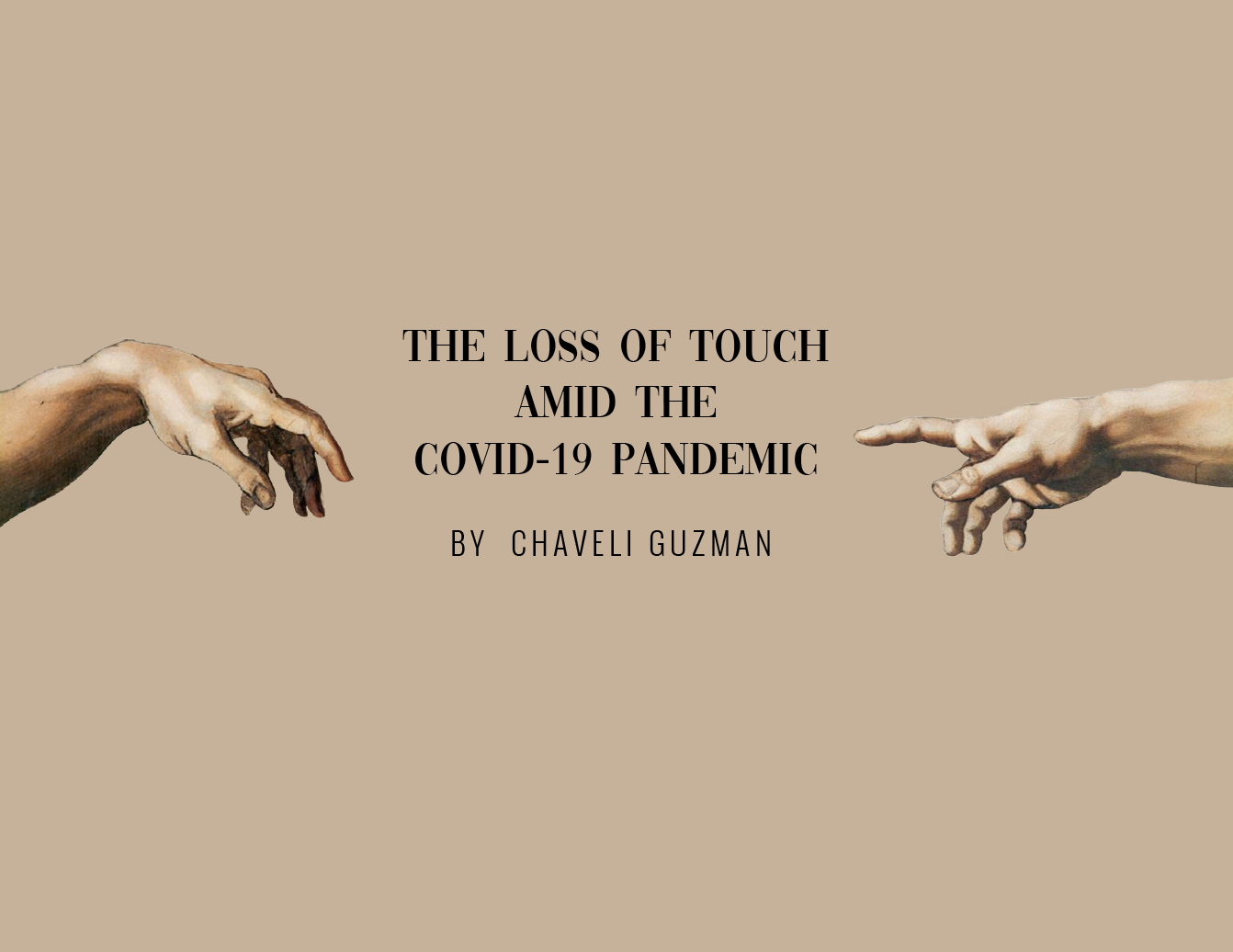 Touch is the sensation that stands as our first interaction with the world. It is a part of communication that begins at birth and expands into old age.

Simplistically, touch carries the ability to evoke some of the greatest emotions that define and sustain us as humans.

During the COVID-19 pandemic, the challenge is to learn to connect, and to express love without a primitive, vital form of human communication — touch.

Touch, which can provide a sense of healing, peace and security, now is the greatest threat of spreading a virus that has killed over 230,000 people.

Simple kissing or hugging can bring significant effects on health and well-being, says developmental psychologist, Dr. Tiffany Field, director of the Touch Research Institute in the Department of Pediatrics at the University of Miami Miller School of Medicine — devoted to studying the effects of touch therapy in all stages of life.

“Touching as in hugging and back rubbing stimulates pressure receptors under the skin that in turn increase vagal activity (the vagus being the largest cranial nerve), slows the nervous system (e.g. decreased heartrate) and the production of stress hormones (cortisol) which in turn saves natural killer cells (that ward off viral bacterial and cancer cells,” said Dr. Tiffany Field over email.

Field says the act of touching increases serotonin, the body’s natural anti-depressant and anti-pain neurotransmitter. When restricted from touch, we lose a sense of what makes us human, and risk our health in its absence.

What is a person supposed to do without the ability of reaching out and touching someone?

This reporter asked four people in New York City, Italy, Tokyo, and Portland, Oregon, how each is handling the loss of human touch during the pandemic. Here are their stories.

For Tim Victor, normalcy was always found in being around people — whether performing music for audiences in New York City cafes, teaching or greeting someone on the street.

“This isn’t real life. This is what happens in movies. And as human beings we were created to have social interaction. And this is in-human. You can’t stay like this forever. It’s almost like we are in prison in our own homes.”

Now, normalcy in his East Flatbush apartment in Brooklyn means using Facetime or Google Hangouts to catch up with friends and family on Instagram Live, and playing music with other musicians.

“I’m a people person. I love people. I like connecting with people. And obviously, this virtual stuff is cool. But we aren’t living in a virtual world. That is a part of being a human being that was taken away from us.”

Each day he adapts to the new and unprecedented reality by relying on virtual connections and his faith in God.

Entering her third month in quarantine, Isabella Allievi ponders on the small fleeting moments of passing colleagues in the hallways at work or on coffee breaks full of laughter. Now those exchanges only exist through the screen of her ASUS VivoBook laptop within the walls of her childhood bedroom.

“Just especially for our culture, and as you know, Italian people really like to be with people and around people. We usually hug and kiss each other so I’ve been missing that.”

Amid the pandemic, Allievi’s mindset lies on focusing on the positive things that can be done — reaching out to people that she hasn’t talked to in a long time, redefining her goals for the future, practicing yoga, reading books and watching movies.

“It’s tough, but I think technology now is helping a lot.”

For Allievi, life continues on despite the days of quarantine and restrictions that grow with each passing day.

As those in Allievi’s town are barred from leaving their homes, the thing she longs for most is to be reunited with nature. — to once again walk along the lake that lies minutes from her home or feel the breeze of the seaside.

However, in the meantime, she relies on remaining connected with people in any capacity. The unifying force with those on the hours of Facetime calls lies in the fact that everyone is equally affected by the pandemic and yearning for the day that the gates of quarantine are lifted.

Over 5,000 miles away from her family in Southern California, Shelley Alingas sits alone in her Tokyo apartment with her cat, Campbell, adjusting to the new inordinate amount of time spent with her pet.

Campbell, though not the most conversational, is considered a saving grace to Alingas, he is a warm body to sleep with and a companion during long work meetings on Zoom.

“I’m a very physical person in general, like, I love being physically active, but also, I’m a dancer. So, that’s just how we communicate, you know, we need to touch and just see each other and feel each other, so that’s huge.”

In Tokyo, being alone doesn’t always equate to loneliness as it does in America. The housing culture is separate from the norm of having roommates or living with family or a partner. Prior to marriage, most young people live within their own space, just as Alingas does. However, after numerous meals eaten alone or the new overwhelming silence filling the streets, the extended quarantine indoors has stretched the normalcy into something uncanny.

What used to be Friday nights spent having dinner dates with friends and doing karaoke, has shifted to Happy Hours spent on Zoom or Google Hangout.

While listening to her friends converse through the multiple screens of the group call, Alingas finds a simplistic security in having her small apartment fill with voices again, even if they are virtual.

As someone who is physical in how she communicates with people, Alingas outlet for touch now lies in petting her cat, Campbell, or hugging her pillow at night.

“And I can’t wait for this. The day where all of this is over. And we finally get to see our friends and family and just like how much you would appreciate that moment.”

When thinking about a post-COVID-19 world, Alingas equates it to freedom — freedom to sit next to a warm body at meals, grab a cup of coffee or sing karaoke alongside friends.

As a video content creator, traveling for Madison McGhee is a part of a normal workweek. However, her return home after shooting a video in Big Sur, California signaled that her boundless life traveling around the world would be reduced to the 600 square feet of her Portland studio apartment.

“It was rough in the beginning. I’m like a very extroverted person. And I’m also, I don’t know, I love being around people and I hate being home. So, this was very weird for me because I don’t recharge by myself. I recharge being around other people.”

Within a week, McGhee’s world felt as though it was imploding. With family over 3000 miles away, she had to grapple with the new demons of loneliness on her own.

As an extroverted spirit, McGhee’s recharge always lied in the company of others, creating memories and living the ongoing adventure that her life always was. When the quarantine created a barrier from her freedom and connection to others, she resorted to what she knew best — creating videos.

Following over six videos created during the time of quarantine, McGhee provides stand-up comedy and parody-style entertainment to her 5,000 followers on Instagram — filling the void of physical loneliness brought out by the pandemic.

“I feel like a lot of us in pre-quarantine life took so much for granted, like touching people or seeing people in person or like the cup of coffee you have with a friend like it was just kind of seemed like another day back then. But now it’s like, ‘what I would give to do that.’”

Though the connections created with her followers and the ones sustained by her friends have made the isolation easier, McGhee continues leaning on the hopeful mindset that she will soon resume her role as a globe trotter and embrace her friends and family once again. But for now, she takes each day one at a time.

How we can continue to touch

The COVID-19 pandemic sprung a unique moment in history that we are all now a part of. After being thrust from normalcy to mass isolation, we are left seeking a substitute to a form of connection engrained in mankind.

The loss of touch within this time is felt within the small moments of gazing out the window to a view of a once crowded street or being on the other end of a call with a loved one and listening to them cry — wishing you could hold them to truly show you are there.

However, communicating and expressing love amid a pandemic no longer by physical touch, but rather by its refrain.

Our new sense of touch lies in continuing to communicate love in any capacity we can.

Staying up late to hear a loved one discuss their day. Falling asleep while a movie or show on Netflix Party plays on. Cooking a new recipe together over Facetime. Reminiscing on memories from the past through photos or videos. Playing a “Heads Up” on House Party. Laughing with friends over a zoom happy hour.

How we move forward without physical touch lies in continuing to be the voice on the other line of a phone call for loved one.  Saying “I love you” and always expressing why. And reaching our hearts as outward as we can until we touch again.

NYC BASED. AVAILABLE FOR TRAVEL.